Tokenization into words or sub-word units is a key component of Natural Language Processing pipeline. Modern approaches such as Byte Pair Encoding (Sennrich et al., 2015), WordPiece or SentencePiece (Kudo et al., 2018) segment rare words into sub-tokens in order to limit the size of the resulting vocabulary, which in turn results in more compact embedding matrices, reduced memory footprint and better generalization. These would for example split the word unaffable into [un, ##aff, ##able] where the prefix un could share its representation with other negating prefixes for other words, for example [un, ##expected].

I believe that familiarity with the implementation details, benefits and limitations of these algorithms is key to understanding the same for the end-to-end models using these tokenizers. For example, while Byte Pair Encoding is a morphological tokenizer agglomerating common character pairs into subtokens, the SentencePiece unigram tokenizer is a statistical model that uses a unigram language model to return the statistically most likely segmentation of an input. While information on the popular Byte Pair Encoding (BPE) is available with detailed information on the encoding algorithms, I felt working examples (with acceptable real world performance) of the sentence piece unigram encoding algorithm were missing. Not meant at being a replacement for the reference article, this article aims at providing an illustrated walk-through the Sentence Piece unigram model encoding algorithm. However, the scale of the project (and potential lack of familiarity with C++) can make a deep-dive through the source code a daunting task for the interested data scientist willing to better understand the algorithm.

Rust has been shown to be a language that is adequate for high-performance tokenization (for example in my rust-tokenizers project or Hugging Face’s tokenizers). The Rust programming language offers a number of features making it a great language for natural language processing (robust and modern string handling, memory safety, effective multi-threading application design, speed and readability). This article provides two example implementations for the SentencePiece ending step in Rust. Importantly, I will show that the raw performance of a language should not replace careful design of the algorithms. This article proposes two implementations that are an order of magnitude apart in terms of execution speed, with the fastest being comparable to the reference C++ code. With both implementation fitting in around 150 lines of code, they make a good learning reference for both Rust and the SentencePiece algorithm itself.

An overview of the SentencePiece unigram model

SentencePiece refers to both a probabilistic word segmentation algorithm (usually the unigram model) and a library (implemented in C++). The SentencePiece unigram model decomposes an input into a sequence of tokens that would have the highest likelihood (probability) to occur in an unigram language model, i.e. the decomposition that maximizes the product of the sub-tokens probability (or more conveniently the sum of their log probability).

The individual token probabilities are built such as:

The SentencePiece unigram model aims at maximizing the likelihood of a unigram language model by starting f which is pruned iteratively using the Expectation Maximization algorithm.

Encoding (the focus of this article) is used during the training maximization step of EM and at inference in order to encode a new input text. The encoding is done using the Viterbi decoding algorithm consisting of 2 macro steps: a forward step (where the possible sub-tokens are identified) and a backward step (where the most likely decoding sequence is identified). These steps are described in detail in this excellent article.

the identify_best_token_ending_at method is described in the following sections of this article.

The illustrations are heavily inspired by another recommended read on the SentencePiece unigram algorithm by Kyle Chung. Let’s take the following example word to tokenize. :

The reference SentencePiece library with a pretrained tokenizer used by XLNet tokenizes this long and rare word as :

The forward pass identifies the most likely token ending at each character position (more on that to follow): 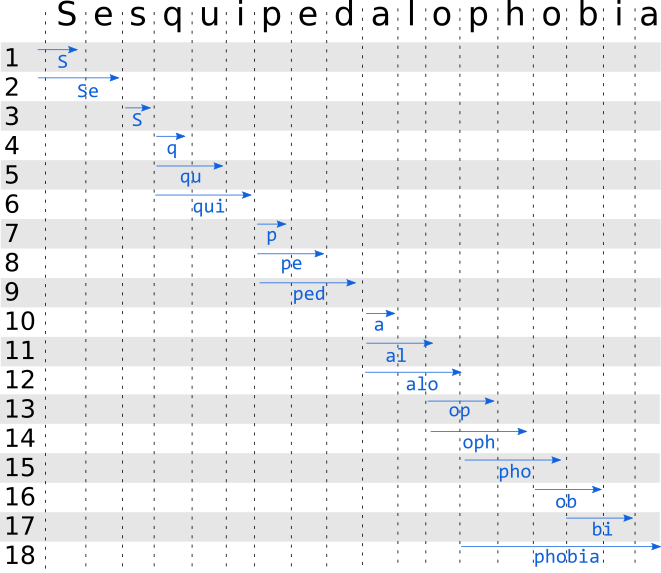 By construction, the forward pass provides the token with the highest likelihood to occur at a given position. The decoding then happens backwards: by starting at the last character, we are sure that the token ending at this position is the most likely. We then only have to walk the proposed sub-tokens from end to start: 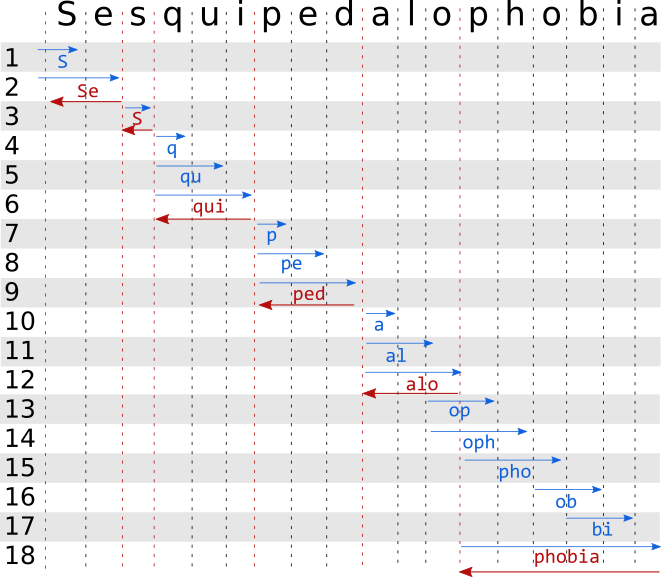 The following will walk through two implementations of the algorithm in Rust.

As a reminder the forward pass of the algorithm requires identifying the most likely token at each character position of the input:

One potential implementation of the identify_best_token_ending_at method is to take slices of the substring ending at end_idx with incremental start position and calculating the likelihood for each slice. This results in a nested for loop to generate these slices. For each slice, the log probability or the token is equal to the log probability of the slice itself added to the probability of the best sequence leading to it. To implement this Viterbi algorithm the best slices and best scores are stored for each ending position and can be re-used to populate the most likely tokens ending at subsequent positions. This is the proposed implementation by Kyle Chung:

The first step is to define a SentencePiece model holding the pre-trained vocabulary and tokens log-likelihood:

This reads a pretrained SentencePiece model using the associated Protobuf. The vocabulary is stored in a HashMap with the token strings as keys and their (log score, index) as keys.

To hold the results of the forward pass, a utility structure is created, called Node (that would be part of the forward Viterbi lattice). This hold the token score, vocabulary index, start and end character position and a reference to the token string (to avoid unnecessary copying):

The forward pass outputs a list of optional Nodes.

From this vector of Nodes, the backward pass is far simpler and navigates the array starting from the last node. The next position is stored in the node itself. The backward pass returns a re-ordered list of best nodes for this tokenization. Here again references are used rather than the actual objects to avoid unnecessary copies:

The final tokenization combines the two steps and returns a string:

Let’s try this out:

All good, we get the expected output! The actual algorithm involves optional lower-casing, NFKC normalization and replaces the whitespaces by \u{2581}. These have been ignored in this simple example.

It works but how fast does it run compared to the C++ implementation? Let’s benchmark it from its Python bindings:

(article 1 or the Universal Declaration of Human Rights)

This C++ implementation takes 9.7µs and 29.8µs, respectively. The Rust version (with all compiler optimizations) takes 29µs for the first and 614.5µs for the second sentence.

Oops! That is 3 times slower than C++ for the short sentence and more than an order of magnitude slower for the longer sentence.

Looking back at the implementation, one can notice the inefficiency during the forward pass: the nested loop will causes N² lookups into a very large HashMap. Using the hashbrown port of Google’s SwissTable allows to take these times down to 14.2µs and 238.9µs. This is better but we definitely still have a problem for longer inputs because of this N² complexity!

The nested for loop over the entire input length is too costly, especially for longer inputs. Intuitively, as the end_idx cursor moves towards the end of the input, one can guess that low values for start_idx of the substring are unlikely to be in the vocabulary. Therefore, one should only explore part of the space of substrings ending (or starting) at a given input character position. The reference C++ implementation relies on Directed Acrylic Graphs.

The main idea is to build a character-based directed acrylic graph (DAG) from the pre-trained tokens and their scores. Every time we insert a token, we also add the character-based path to the token if it does not yet exist. A difference is made between the DAG nodes that do exist in the SentencePiece model (marked as leaves) and the nodes that do not have a matching. Every token is pushed by being added to the children of the token containing all characters except the last one:

The following figure illustrates the population of the DAG assuming the first 3 words are cat, carp and car.

When “cat” is fist inserted, the DAG is empty and therefore the intermediate nodes “c”, “ca” and “cat” need to be created. At the last character position (node “cat”), the node is marked as a leaf. When “carp” is inserted, the nodes “c” and “ca” already exist and the graph is navigated. The child node “car” cannot be found in “ca” children, and is therefore created. At this point it is marked as a non-leaf node, and carp” is added to its children as a leaf node. When the token “car” is inserted to the DAG, all nodes already exist. We navigate the graph to the existing node “car”, mark it as a leaf and store its log probability.

This DAG allows to quickly get all of the possible token that share the same prefix for a given substring. However, one can note that while this was done by iteratively checking every substring of a given input in the previous method (therefore requiring N operations for a substring of length N), we can now navigate the DAG by feeding the character sequence from the substring query. We keep track of all of the leaf node encountered along the way, and stop early when we cannot find the next character in the current node children. This means that for any substring, we do at most k operations (where k is the depth of the DAG) and in most cases far less.

By asking for all DAG nodes sharing a prefix with “carpooling”, we’d obtain the result ["car", "carp"] in 5 operations as opposed to 10 (length of carpooling), as illustrated below: 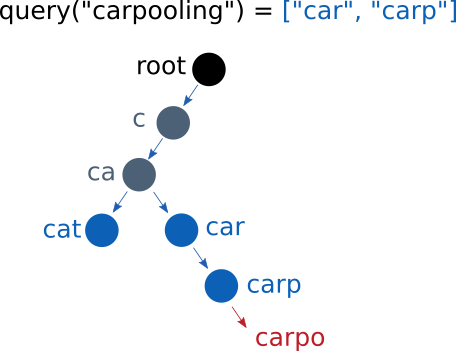 The Viterbi forward pass can be re-written to take advantage of this efficient way of recovering tokens sharing a common prefix:

The nested for loop over the length of the input has been replaced by the more effective find_common_prefix illustrated above that depends on the DAG depth. The decoding algorithm remains identical.

How would a Rust implementation look like? Let’s start by defining a few structures to store the nodes from the DAG. A node contains a String, a length (UTF-8 code points), a score, vocabulary index, a leaf flag and a children Hashmap initialized to be empty.

Our SentencePiece model now uses a DAG (referenced by the root "" node) instead of a vocabulary Hashmap. This is populated following the method described previously using an insert function:

The common prefix search method returns a vector of references to the nodes of the DAG sharing the same prefix of a query string slice:

Finally the forward method looks very similar to the first implementation but is updated to leverage this decoding, and creates substring slices by moving a start_idx rather than a end_char cursor:

Let’s try this out!

The output is still as expected. Do we observe performance benefits? Running the same benchmark as before, we now obtain a tokenization speed of 12µs for the first sentence and 44.8µs for the longer second sentence. This is still slightly slower (although in the same order of magnitude) than the reference C++ implementation, but more than 13x faster than our original implementation!

There is still room for optimization, but this implementation of a SentencePiece encoding is readable, fits in about 150 lines of code (compared to a much larger codebase for the C++ counterpart) and runs at a speed that is comparable to the reference. The supporting code used for this article is available in the following repository. Please note this code is designed for educational purposes. A more comprehensive implementation of this tokenization that includes vocabulary encoding and begin/end offsets of the tokens with respect to the original strings is available on the rust_tokenizers crate.